On Tuesday 6 September RfP Europe Secretary General Professor Mark Owen, met with the German Bundestag and presented on the aims and the activities of Religions for Peace Europe. Professor Owen was accompanied by Johanna Tannen, who spoke about the Metropolitan Regions Project she is managing on behalf of RfP Europe in partnership with the Berlin Senate. 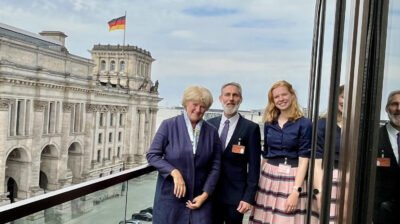 The Bundestag is the German federal parliament. It is the only federal representative body that is directly elected by the German people. It is comparable to the United States House of Representatives or the House of Commons of the United Kingdom.